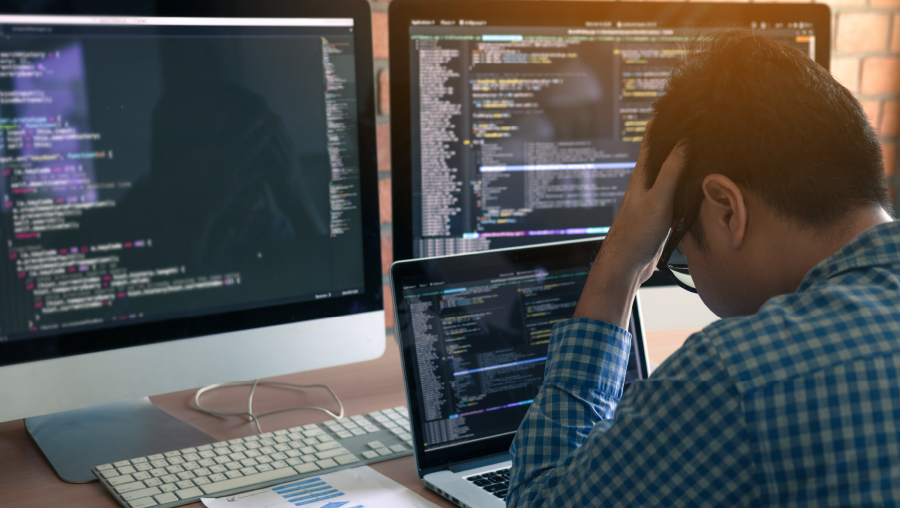 If you know that building enterprise applications with code isn’t serving you but you still can’t seem to break away, you might be in a code-dependent relationship. Here’s how to spot the signs.

There comes a time in every long-term relationship where you have to ask yourself, “Is this really working?” Enterprises that build web applications on code-based platforms have probably asked themselves the same question. If your relationship with code is boring, frustrating, and completely unsatisfying yet you find yourself unable to make a clean break, you might be in a code-dependent relationship.

We turned to Krenar Zhubi, one of our Senior Sales Development Representatives, for some relationship advice. Here’s his take on what toxic code dependency looks like, and how building with no-code can help enterprises break free.

At first, you might not think there’s anything wrong with your relationship to code. You’ve been with code for years and sure, it’s a little expensive and time-consuming, but it gets the job done—so who are you to complain? But before long, you find yourself on a slippery slope with code.

“If you’re overdependent on code, you’re hammering away at the same problems with the same tools instead of thinking about whether or not there’s a better way to do things,” Krenar says.

In a code-dependent relationship, it can be hard to see and accept that this partnership isn’t serving you. “If you’re overdependent on code, you’re hammering away at the same problems with the same tools instead of thinking about whether or not there’s a better way to do things,” Krenar says. Your relationship with code was exciting and helpful at the beginning, but now you’re just in a rut. If you think you might be in a code-dependent relationship, look out for these three classics signs of code dependency.

If you’re in a toxic relationship with code, you have to handle their past flames popping up. To implement new technologies and add functionality to your web application, you have to work around existing codebases that could be years old, even decades! And when legacy code goes unchecked, it snowballs into “Big Code” which is even harder to fix.

Plus, once one legacy code is addressed, another one needs solving right away. This never-ending on-off relationship slows down development time and stunts innovation. Before long, you’re spending all your free time maintaining and debugging legacy systems—including systems you don’t even use anymore—just to keep your application up and running.

All the spark is gone when you’re in a toxic relationship with code. You’re spending so much time and resources maintaining legacy systems and managing buggy applications that innovation falls to the wayside. When there’s no time or energy left to create something new, your application’s functionality, relevance, and competitiveness will falter.

3. Your developers are unhappy

Toxic code-dependent relationships negatively affect everyone around you. Your talented technology experts don’t want to waste their expertise on mundane jobs like automation of simple processes, they want to innovate—unfortunately, keeping a code-built application alive takes a lot of people doing a lot of routine maintenance.

“Developers are happiest when they're building new things and getting to learn and experiment with new technologies, so when one person unwillingly falls into the caretaker role and has to manage dozens of repetitive tasks, that person will probably find themselves a bit miserable. And they’re not going to be their best self in a relationship either,” Krenar notes. “Tech experts shouldn’t be focused on making apps that already exist. Ideally, they’re focused on bringing the most innovative use-cases to your organization.” Given the climbing skills shortage, you don’t want to ruin the relationships you have with your developers to try and save your failing relationship with code.

Breaking up with code

Breaking up is hard to do, but sometimes it’s essential. “No-code erases code dependency,” asserts Krenar, by helping you see all the ways code holds you back. No-code means no code to maintain, allowing you to focus on developing new innovations rather than tinkering with minute computations that could make or break your applications.

Want to see no-code in action? Watch this 1 minute build.

No-code “empowers business users and analysts to build everyday solutions under a developer-guided structure,” Krenar explains. This enables your team to quickly solve problems simultaneously, so you can devote more energy toward building new services and driving your competitive edge.

Unqork’s visual interfaces, drag-and-drop components, and easy integrations make enterprise application development faster and easier than ever. If you’re in favor of a more gradual uncoupling, the Unqork platform can also integrate with existing legacy systems until you’re ready to take the first step on your own. Building your independence from code can be a little scary, but Krenar assures us that it’s worth it in the end.

To learn more about how Unqork’s no-code platform works, schedule a personalized demonstration with one of our in-house experts. Also, sign up for the Unqork newsletter to discover more ways no-code is changing the enterprise application industry.