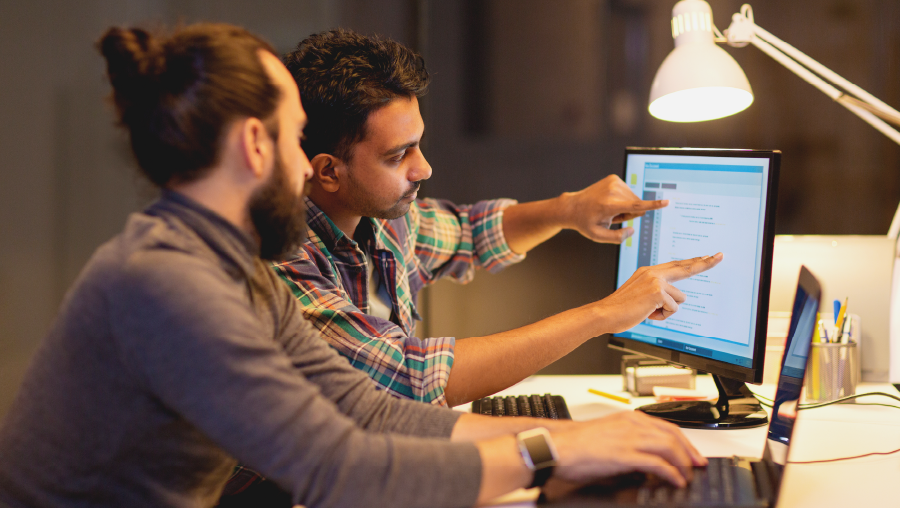 Code can hold your enterprise back in a variety of ways—slower time to market, less collaborative development, the potential need to outsource more projects—but it also might be forcing you to invest all your resources looking for what's next.

When building enterprise applications with code, organizations must constantly look ahead to see if there are technological advances on the horizon that could make your stack obsolete.

According to the Udemy 2020 Workplace Learning Trends report, there are zero overlaps between the most popular tech skills from 2016-19 and the most sought-after skills in 2020. In addition to demonstrating how fast the tech industry moves, this finding highlights how we rarely reach back for older programming languages once we have evolved past them.

If your enterprise uses yesterday’s code to power its applications, every update you roll out or feature you add is contributing to legacy maintenance in the years to come. Nobody knows what kinds of languages we’ll come up with next, but building your digital infrastructure with no-code means that you don’t have to.

Keeping Up With Code

It’s understandable that enterprises feel constant pressure to keep up with new technology. Old technologies are easier to exploit, and with sophisticated cybersecurity threats on the rise, keeping your software up-to-date is critically important. Enterprises also want to make sure they stay competitive in a rapidly changing market, both in the eyes of their customers and potential talent.

Check out this demonstration of our new Workspaces function which makes it easy to bring order to an open collaborative platform like Unqork.

From an individual developer’s perspective, coders are encouraged to keep up with the latest programming languages, with some even suggesting that it’s worthwhile to dedicate time to learning one new language per year. This consistent learning and development pattern contributes to the total change of popular tech skills over the years. As such, a certain degree of evolution is expected. The problem with keeping up with code, however, is that it doesn’t pay off—literally or figuratively.

In 2019, total IT spending only rose 0.5%, while enterprise software spending jumped 8.5% to a staggering $453 billion. If your enterprise is still using code, a significant portion of that spending will go to fixing bugs, paying off technical debt, and maintaining legacy technologies. Essentially, rather than paying for innovation, most of your budget goes towards maintaining applications built on soon-to-be outdated languages—that will only continue to eat up larger and larger portions of your IT budget.

If you want to build complex applications and make the best possible software available to your customers and staff, using code isn’t the answer. By eliminating code, you eliminate the need to constantly keep up with code’s changes. This empowers you to freely innovate without worrying about what updates are lurking beyond the corner, threatening to make your stack obsolete.

From a recruitment-and-retention standpoint, keeping up with code can also cause problems. Across the board, the IT skills shortage has made it more difficult for enterprises to find top talent. Enterprises that work with code often look to hire people who can work with their current stack, which takes an already small pool of candidates and makes it even smaller. If your code is outdated, you’ll be hard-pressed to find someone who still works with that language.

Code can complicate this equation even further as top candidates develop their skills according to what technologies will be popular soon—and then begin to seek out jobs that match their advanced skill sets. Building applications with code means that new talent soon won’t want to work with your software because it uses a language they’re no longer interested in working with (or potentially don’t even know!).

Switching to a no-code platform frees you from the seemingly endless cycle of updating, moving away from legacy systems, and updating again once your new systems eventually become legacy systems themselves.

No-code democratizes enterprise app development so that users with an idea can bring it to life—rather than limiting development to those with niche skill sets. No-code prioritizes logic over syntax and workflow concepts over coding ability so recruiters can look for candidates who have the total package.

Switching to a no-code platform frees you from the seemingly endless cycle of updating, moving away from legacy systems, and updating again once your new systems eventually become legacy systems themselves.

No-code breaks this pattern by allowing you to focus on what your software can do, not the code powering it. Instead of having to be conscious of when code will become obsolete, the Unqork team researches the latest software development trends and innovations that power the back-end of the platform to keep rolling out new features and capabilities. The notable difference between our update process and updating code is that you’ll never have to play catch-up. With no-code, your technology grows with you, rather than you growing out of it.